Andromeda Invaders is a 1980s-arcade-style game runs in a
modern web browser. This game is inspired by Space Invaders, the 1978
arcade game developed by Tomohiro Nishikado. However, the game
characters, gameplay, and some technical aspects of this game are very
different from those of Space Invaders. 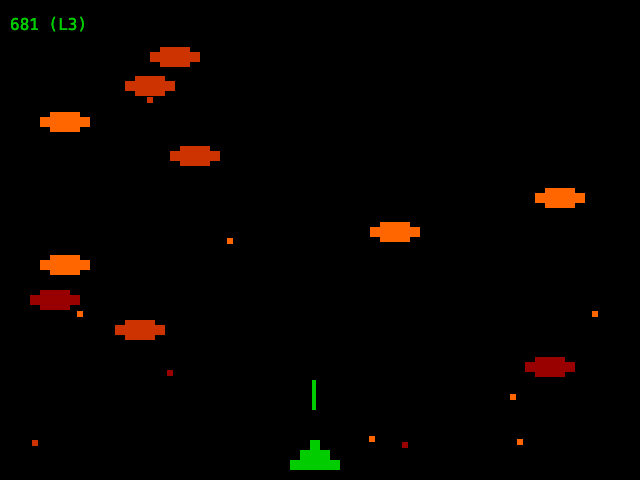 The current stable version of the game is available at the following
links:

A testing version of the game with recent bug fixes is available here:

There is rudimentary support for playing this game on small screens
and touchscreens using the buttons provided below the game canvas.
However, this game is best enjoyed on a laptop/desktop device with a
physical keyboard.

Since it is a single-file game, you can also save this game to your
system by right clicking one of the links mentioned above and
selecting the option to save/download the HTML file.

While playing on a keyboard-enabled device, the following keys are
supported:

The last key to enter/exit to fullscreen mode may not work on all web
browsers.

All of the graphics is done by drawing rectangles and text on an HTML5
<canvas> element using the Canvas API.

All of the audio is done by playing sine waves generated using
OscillatorNode of the Web Audio API. The sine waves used for the
game audio correspond to actual musical notes from the C major scale.
Multiple notes are played together to form chords. The background
music is a chord progression consisting of four chords repeating over
and over again as long as the game is being played. When the game
characters get hit, the hit sounds are made of a single chord that
plays for a very short duration.

You are encouraged to play the game without reading this section. I
believe there is a certain joy in figuring out the game on your own
without referring to any hints or existing documentation. For this
reason, I suggest that you skip this section and go play the
game first. If you really must understand the gameplay right now, the
following subsections contain notes about various details of this
game.

Not so long time ago in a galaxy near, near away …

Bright orange ships visit the player’s planet and begins dropping
canons to hit the player. The player defends its planet by hitting the
ships and the falling canons with laser pulses. When a canon is hit
successfully, it vanishes instantly. When a ship is hit successfully,
it loses its health. The health is indicated by the colour of the
ship. Bright orange indicates perfect health. When a bright orange is
hit, it turns dark orange. When a dark orange ship is hit, it turns
dark red. A dark red ship is in critical condition. If a dark red ship
is hit again, it dies.

The game can be played indefinitely long. There are multiple levels in
the game that are numbered 1, 2, 3, and so on. After level 1000, the
level is reset to 1, however, the score remains intact, so one can
keep playing levels 1 to 1000 repeatedly in a loop if one has the
patience and skill to do so.

The following table shows the various game parameters for each level.

In the table above, the unit of speed is pixels per frame (PPF), i.e.,
the number of pixels an object appears to move from one game frame to
another. Here, the term game frame refers to a single instance of
rendering the game state to the HTML5 <canvas>. The game state is
rendered 50 times a second. The speed of the canons is chosen randomly
from the closed interval shown in the Canon Speed column. The unit
of music tempo is beats per second. Each chord is played in a beat.

To summarize the table above, the game becomes progressively more
difficult to play in each level until level 20. The game parameters do
not change between levels 20 to 1000. After level 1000, the game
resets to level 1 but the player’s score remains intact. Thus the game
can be played indefinitely long in theory. However, in practice you
might find that it is quite difficult to reach even level 10 or so.

I first came across Space Invaders in the 1990s in the computer
laboratory of my lower secondary school. Soon after playing the game a
few times, I wanted to develop a similar game of my own. However, the
little GW-BASIC programming I knew then was insufficient to write
anything more sophisticated than simple text-based input/output
programs. I did write several simple text-based quiz and adventure
games back then but a more sophisticated game with graphics and audio
remained elusive. As years went by, I gradually forgot about it,
learnt more mainstream languages like C, Python, Lisp, etc. and got
into programming as a career.

Although it is 25 years too late, I decided to spend a weekend to
fulfill my childhood desire to write my own Invaders-like game. This
project fulfills a childhood dream of mine!

This is free and open source software. You can use, copy, modify,
merge, publish, distribute, sublicense, and/or sell copies of it,
under the terms of the MIT License. See LICENSE.md for details.

This software is provided “AS IS”, WITHOUT WARRANTY OF ANY KIND,
express or implied. See LICENSE.md for details.