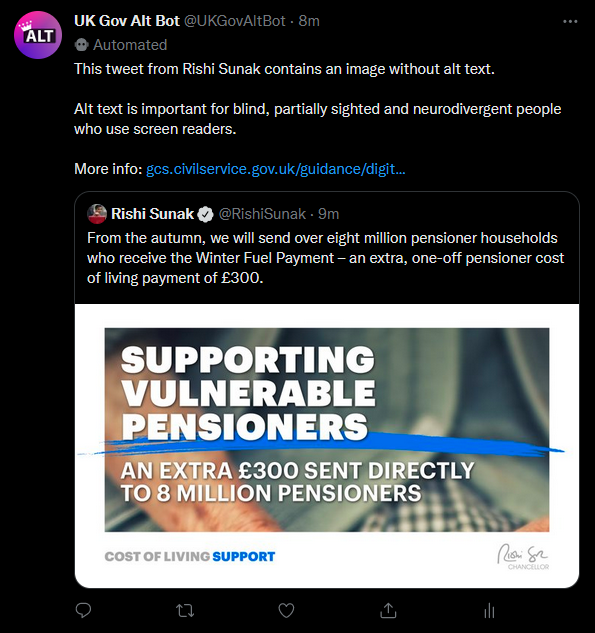 This engine powers bots which find images posted by users the bot is following. If they don’t have alt text the bot quote-tweets them, pointing the tweet’s author to guidance on how to use alt text. You can power multiple bots with a single instance of the engine.

Once the bot account is registered, you should add an ‘Automated by’ label to it.

To add this label:

After you’ve signed up, you’ll be asked to create a project, then an app. Go through these steps. The app name you choose will be shown on your tweets where you’d usually see ‘Twitter for iOS’ or ‘Twitter for Android’

Once your app has been created, you’ll be shown an API Key and an API Key Secret. Copy these now and keep them safe – you’ll need them later.

You’ll now have access to the v2 API. Unfortunately we need access to v1.1, because the endpoint the bot relies on (statuses/home_timeline) isn’t in v2 yet.

To get access to v1.1, you’ll need to apply for ‘elevated access’. Select your project from the left-hand menu. You should see the following option:

You’ll have to fill in a bunch of boxes about your ‘intended use’. Here’s some suggested text for each part:

Describe how you plan to use Twitter data and/or APIs

“I’m developing a bot which follows [TYPE OF ACCOUNTS YOU’RE PLANNING TO FOLLOW] to check whether the images they’re tweeting are accessible to blind and low-vision users. This was inspired by your recent roll-out of the ALT badge so that users can see which images have alt text.”

“Using the ‘statuses/home_timeline’ v1.1 API endpoint the bot analyses every tweet from [TYPE OF ACCOUNTS YOU’RE PLANNING TO FOLLOW] and looks for images included in the tweet. The bot determines whether the images in the tweet all have alt text by looking at the ‘ext_alt_text’ property for each image. Using the v1.1 API is necessary because v2 doesn’t have an equivalent to the home_timeline endpoint and the list endpoints don’t allow you to filter out things like replies and retweets.”

Will your product, service, or analysis make Twitter content or derived information available to a government entity?

And now we wait

After you’ve submitted your application, you may need to wait a few days for it to be approved.

Your bot will only quote-tweet accounts that it’s following, so go and follow those accounts while you wait for your API access to be approved. Following is rate-limited and you can only follow 400 accounts a day, so take it steady.

Step 1 – Get an OAuth token

Make a POST request to https://api.twitter.com/oauth/request_token?x_auth_access_type=write. You’ll need to use OAuth 1 authentication. The Consumer Key and Consumer Key Secret are the API Key and API Key Secret you got when you were setting up your Twitter app. 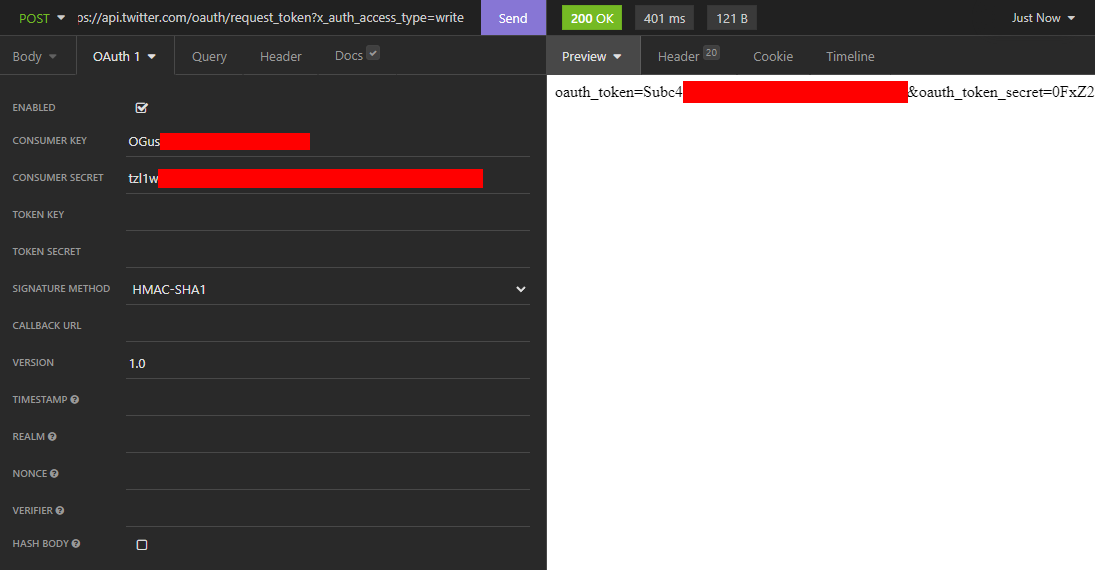 Step 2 – Go to the authentication URL

Make sure you’re signed into Twitter with your bot account, then go to https://api.twitter.com/oauth/authenticate?oauth_token=TOKEN, replacing TOKEN with the oauth_token from the last step.

Go back to your REST client and make a POST request to https://api.twitter.com/oauth/access_token?oauth_verifier=PIN&oauth_token=TOKEN, replacing PIN with the PIN from step 2 and TOKEN with the oauth_token from step 1.

In the response, you’ll get a different oauth_token and oauth_token_secret to step 1. These are the Access Token and Access Token Secret you’ll need for your bot. Copy them somewhere safe.

If you want to run multiple bots you can add more entries to the botAccounts array. You’ll need to follow the steps above to register a Twitter account and authenticate for each bot.

If you want to change the text the bot uses when it quote-tweets, you’ll need to edit the status param in the retweet function in AltAlertBot.js.

This is useful if, for example, you want to localise the bot to a different language. Please keep the text polite and informative, and do not @mention the account you’re retweeting. Unsolicited @mentions are forbidden in the API terms of use and your bot is likely to be shut down if you use them.

Your bot(s) should start up and begin logging to the console:

Running on a server

You’ll probably want your bot running on a server to ensure it’s always on. That’s outside the scope of this README, but Googling for ‘run node app on ${your cloud provider of choice}’ should help.

This project is licenced under the MIT License. An acknowledgement on your bot’s Twitter profile is appreciated but not necessary.

If you’d like to, you can support me on Ko-Fi:

Bots powered by this project

As well as the bots I run – @UKGovAltBot, @UKCouncilAltBot and @USGovAltBot – the following bots are also using this engine:

A set of custom CSS rules to make alt-text visible on Twitter's desktop web interface
20 January 2022
TyperText.JS is a Single Script File for Typing Animation
05 July 2022
Sample app to show how to use Watson Speech to Text with phone calls from Twilio
03 July 2022